Founded in 2012, the Co-Ed Assyrian Volleyball League has emerged as one of the most prominent organizations in Chicago’s Assyrian community. Bringing together males and females of all ages, the league is committed to both the sport and its individual participants. Our goals are very much invested in the community. We hope to provide a supportive environment where all are welcomed, not only to take part in the games, but to make friends, and ultimately, empower our people as a whole. With the number of players, teams, and fans on the rise, we are hopeful for the future of the league.

The regular season usually runs a ten-week course, followed by playoffs and a championship game. At the end of the season, certain players are awarded titles including Most Valuable Player and Rookie of the Year. There are no formal practices, though many of our athletes choose to do so on their own. Each team participates in a game every Tuesday night during the season. Some of our players have athletic backgrounds, while others are playing for the first time.

Games are hosted at Feldman Park in Niles, IL. AVL is proudly entering its fifth season. All are welcome to join in on the action—whether by playing in our games or cheering on our teams. See how you can get involved.

Without the support of the Assyrian community and our sponsors, none of this would be possible. On behalf of the Assyrian Volleyball League as a whole, we would like to extend a thank you. We are excited for things to come as the league continues to grow. It is our hope that this league will last through generations of Assyrians. See you Tuesday nights at Feldman!

If you are interested in becoming a sponsor, please click on the above form for more information.

The AVL committee consists of individuals passionate about the Assyrian community. They volunteer their time to organize the league, and work consistently to ensure that things run smoothly throughout the season. It includes founding members: 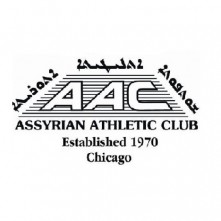 The Assyrian Athletic Club (AAC) has been around for over forty years, bringing together Assyrians at large for generations. AAC has played a major role in the success of all Assyrian athletic leagues, including the very popular Assyrian Basketball League, Winged Bull Soccer, and of course, the Co-Ed Assyrian Volleyball League. AAC has been essential to the Assyrian community since its inception, and is committed to the future of athletics in our community. They continue to prosper as the years go on, becoming a tradition in the Assyrian lifestyle. AVL is proud to be an affiliate of AAC.